His whole body breathed a sigh of relief when he set foot over Newgate’s threshold. He paused briefly and took another deep breath. In this way he hoped to shake off the muff, screams and cruelty of this prison after his shift. For a short moment he felt the tiredness take possession of him. He shook it off and stepped into the darkness of London. Newgate never really let him go. After only a few steps along Fleet Street he thought again of the Inmates and of the fact that most of them would probably spend the rest of their lives in this stone grave.

»How fitting,« he thought, »that these bitches are already half-dead anyway,« and kicked at a mouse that was just about to rummage through London’s filth. Leaving the cold walls of Newgate behind and arriving at his tiny apartment, the desolation of his own life overwhelmed him. An extra log in the stove did not change a thing. Melancholicaly he thought of his time in the Navy and his freedom on the high seas. It was little more than a memory that kept fading. What remained was emptiness, which spread inside him like a disease for which there was only one medicine: Gin. 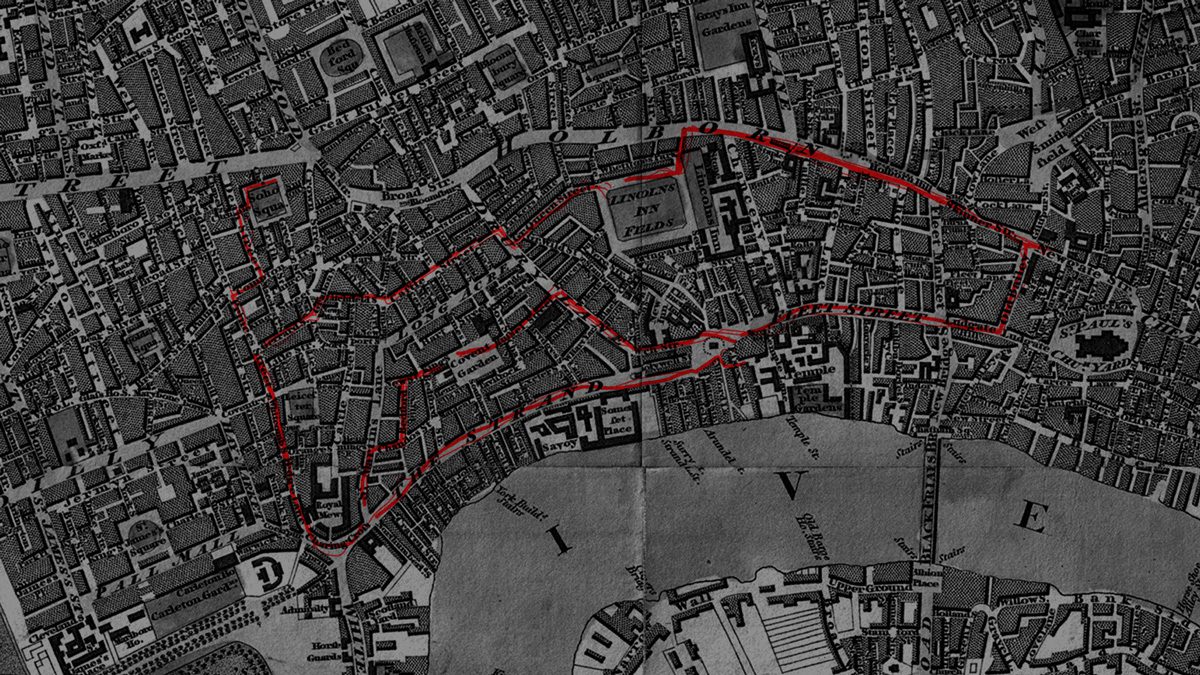 1
Princes STRT No. 46: Loneliness – As soon as he unlocked the door to his apartment after a long night in Newgate, he finally felt safe. At the same time he felt the emptiness returning to his life without a wife and children.
2
Lincoln’s Inn Fields: Silence – Before a long shift, sometimes a short walk among the old yews on Lincoln’s Inn Fields was enough to gather energy for the cruel world behind the walls of Newgate.
3
Newgate: Aspiration – Behind the walls, probably the most depressing place in London, nothing seemed to wait but death. For him, however, it was the last chance for a social advancement.
4
Covent Garden: Pleasure – In the “Bucket of Blood” he could not only enjoy one to four glasses of gin, but simply enjoy himself with like-minded people in a bloody fistfight and howling crowd.
5
St Martins Lane No. 12: Fortune – Whether cockfighting, horse or dog racing. At Gilberts the bookmaker he always found the right bet. However, he knew exactly when he should better suspend his bets in order not to end up in the Thames.
6
Clear Market: Oblivion – Mrs Ts’ao ran a launderette for dirty shirts. But when the dirt of London became stuck in people’ s minds, Mrs. Ts’ao used her opium cave to help cleanse the mind.
7
St Patrick´s Church: Forgiveness – The relationship with Father Cillian was probably the closest to friendship. At the weekly confession he could drop all the sins of London. Whether it was gambling, opium or a secret it remained with Cillian and God. Right?

Completely stunned, Father Cillian stepped out of the confessional. The XXXXXX XXXXXWarden 21/07 had already hastily disappeared into the shadows of the city again. But what Cillian had just heard from him was so insane that he couldn’t believe it. Hastefully he made the sign of the cross in front of his chest. Cillian had never seen his friend so shaken and tense. Cillian didn’t even understand half of the story XXXXXXXX XXXXXXXWarden 21/07 had just told him. He already knew about Rose. But a gin? Made by the Inmates of Newgate!? On top of all this came the alleged intrigues and dark machinations that his friend wanted to uncover. And all this happened here, in the middle of London, not far from his church! Cillian still couldn’t understand. His eyes fell on a bundle of paper that was lying on the bench where his friend had kneeled before. When he picked it up, he recognized the records his friend had spoken of and hurriedly put them under his robe.

Even days later, Cillian would not let go of the last encounter with his friend. He had to give him back his records before he left on a long pilgrimage to follow the tracks of an Irish saint. Lost in thought, he was walking across the courtyard of the church when a herald reached him with a sealed letter. It came from Newgate and had the official seal of the prison beside his name. Still in the yard, he hurriedly ripped up the letter and began to read the few lines:

As the only contact person of Mr. XXXXXXX with the number 21/07, we are sorry to inform you that he was found hanged in the cellar of the prison on Friday, 03 March 1815. An investigation into the circumstances of his death has been initiated.

In disbelief, Cillian stared at the note in his hands. Warden 21/07 was dead and he had doubted his story! If only he had listened to him better, visited him after he had been with him the last time. If only he had tried to stop him from his plan! Would his friend still be alive then? He took the records and read them with the care he should have taken from the beginning. Line by line this time.

How could he have been so incredibly stupid not to have done this much earlier? Full of guilt he made a decision: he had to leave London as soon as possible to atone for the mistakes he had made on his journey. Quicker than planned, he packed everything that was necessary, put his friend’s notes between the pages of the Holy Scriptures and set off. His goal: to follow the traces of Saint Kilian to the diocese of Würzburg.